At heart I am a storyteller. I have created and told thousands of stories for children since I began teaching and all of them relate to the children, where they live and the local flora and fauna. From these stories come many other creative experiences for children. They include experiences in drama, sculpture, painting, drawing, dance and songs. Over the years I have created hundreds of songs based on the characters in my stories. Below you will find links to sample recordings of three of my songs and many text files containing lyrics of the songs I have written about characters in my stories. Please note that these recordings are rough – home made and I am not a sound engineer – so all the errors are mine. The point I wish to make here for educators is that you don’t have to be a professional musician or sound recordist to make music with children.

The following Song: Hetty PJ Shark emerged during my doctoral research and was based on the Port Jackson Shark just south of Sydney. These sharks have some particular skills that are unusual is sea creatures, they can stay completely still for long periods of time. They also have most spectacularly shaped egg cases that form a conical spiral with points around the spiral. Hetty was a favourite character in the preschool. The paintings below are of the egg cases.

Jingle Jolly Jellyfish has been around a long time. Children from my early kindergartens, who are now adults and parents, have recently commented on Facebook that they sing this song to their children.

Slippery Sally Snake emerged during my doctoral research also. A student teacher at the early childhood setting had a pet python that she brought in for the children to see. This generated many stories and resulted in the children (and adults) learning much about pythons, their life cycles, habitats and growth patterns: some of which is contained in the following song. 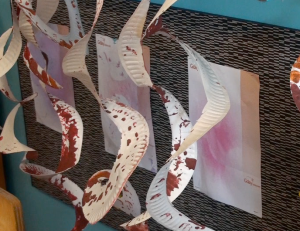 I have approximately 200 titles that I have authored with the children’s program as a focus. Most of these songs are based on flora, fauna, landscapes and weather phenomena. Please see the following links to the pages that list my song titles: